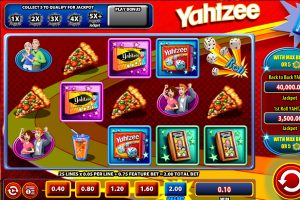 Yahtzee is an exceptional socially enjoyed dice game by Hasbro that was discovered by Milton Bradley. The objective of the game first known at Yatsie in Ohio is to score high by rolling in certain combinations.

WMS created a video slot game to match the enjoyment of the game and to increase its popularity by offering online players a profusion of additional opportunities to spin in astounding rewards.

Instead of the shake, rattle and roll, the online Yahtzee offers a bonus, wild and roll, and a staggering five of a kind Yahtzee back-to-back jackpot worth 40,000.00.

WMS delivers a brilliantly created video slot and keeps the social effect intact by utilising laughter, chatting sounds, cups clicking and lots of chatter sound effects. The game offers a classic style layout with multipliers displayed above the reels, the jackpot advertising back to back Yahtzee jackpot win of 40,000.00, and for a first roll, the prize is 3,500.00 when a maximum bet is selected.

Yahtzee video slot contains three main entertainment highlights, which is the wild, the bonus, and the roll, and once you start winning, these features are truly capable of keeping you in the pounding seats.

The twirling yellow and orange lines represent the wild symbol that stands in for all others apart from the roll and bonus symbols. The wild twirl appears exclusively on the second, third, fourth and fifth reels. Once the wild multiplier is active, it could increase winnings by a multiplier starting at 2x up to a massive 36x.

The 4 to a Yahtzee free roll bonus becomes active once 5 scattered roll symbols are visible and then four dices of the same number will be held while one dice is rolled, awarding a four of a kind Yahtzee.

The Yahtzee bonus round appears on the fifth reel only and once 5 bonus symbols are collected, the bonus round triggers automatically. Clicking the blue cup shakes the dice, and the greatest number of the matching dies are held, while subsequent will change the initially held dice only if bigger. The evaluation takes place after three rolls, and the number of bonus symbols triggering the bonus round multiplier is awarded. When three rolls fail to produce a pair, the chance bonus is awarded.

Rolling a Yahtzee on the first roll awards the first roll jackpot and an extra roll of 5 dice are awarded, and if on this awarded second roll, another Yahtzee appears to start celebrating at the back, a back-to-back bonus is awarded, which is the maximum jackpot win if the roll occurred during a maximum bet spin.

What we Like/Dislike About Yahtzee Video Slot

Yahtzee video slot created by WMS appeals to players who have played the dice game before and welcomes new players to a game that is highly enjoyable, super easy to understand and the bonus features offer substantial rewards.

The online video slot version is as entertaining as the original, although the cash rewards ensure an enthralling experience consisting of handsome rewards during the main game and lots of opportunities to a role in some wealthy bonus prizes. Aim for the back-to-back jackpot role, and you would probably never play anything but Yahtzee again.