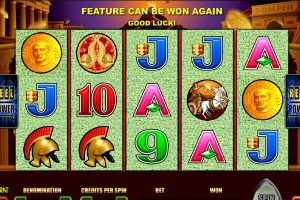 Pompeii is a video slot that has been created by Aristocrat. The game is based on Greek mythology, which can be enjoyed in each aspect of what the theme provides, including the golden background showing chaos with a volcano erupting in the middle of the night.

The developer has included multiple bonuses to ensure rewards flow easily and provide a worthwhile gaming opportunity. Game graphics have been left standard as Aristocrat has delivered more detail towards game features and payouts, which range up to a huge 2,500 coins at minimum bet. Players have the ability to enjoy various bet options that ensures all are welcome and winnings can be achieved.

To ensure the theme represents all that is Greek and forms part of Pompeii, the developer has taken the time to create a background that features a Greek building and a sky filled by smoke due to the volcano. On the reels, players have the ability to activate payouts by lining up just 2 of some symbols, and at least 3 of other symbols from left to right. Symbols include the volcano, a warrior helmet, a sword and golden shield, a golden coin, and much more. The reels can also include high card symbols, which offer lower payouts, but appear more often and offer payouts.

Pompeii provides a great range of reward opportunities, which can be triggered with any of the 243 ways to win. The symbols appear over 5 reels and could easily activate combinations or trigger bonuses such as free spins. In addition, there are also wilds that can ensure combinations occur on a regular basis.

The wilds are none other than the volcano. It will become animated whenever a winning combination is activated with the wild. These symbols appear only on reels 2 and 4.

Pompeii includes various symbols and reward opportunities that includes the red ruby and gold symbol that will provide rewards of 2,500 coins should 5 of them appear on the reels in a consecutive order. The second higher payout is granted when the warrior helmet appears in a combination of 5, which rewards 2,000 coins.

The game also includes scatters that are represented by the golden coin. These symbols can also appear from left to right to include a winning combination, or in scattered positions to initiate the free spin bonus feature. The amount of free spins activated will depend how many scatters appear at the same time.

At least 3 are needed that will reward 10 free games, but should 4 appear, a total of 15 are rewarded, and finally, if a scatter appears on every reel, the game will provide 20 free spins. During free spins, the volcano will remain wild, but includes a 3x multiplier to boost rewards and winning combinations. The scatters also appear in the feature, meaning it will be possible to trigger the feature again.

What we Like/Dislike About Pompeii Video Slot

Pompeii provides a great gaming opportunity that provides a number of rewards with features and combinations. Players have the ability to activate highly impressive payouts with the free spin round irrespective of the bet value. However, keeping a higher bet active is sure to result in bigger winnings.

The only dislike in the video slot would be the graphics and somewhat limited features. We feel that the Aristocrat could have included a better looking interface and symbols to represent what it stands for, but for an easy gaming opportunity, Pompeii is a video slot well worth trying by all players.