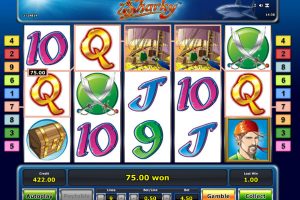 Sharky presents a gaming opportunity that provides multiple themes. These include sea animals as the game suggests, but also a pirate theme when looking at the different symbols included. A video slot also seems to be a lot more interesting when pirates and ocean animals are involved, especially an amazing animal such as the great white shark.

Novomatic has managed to capture the best of both worlds in their video slot called Sharky, which also includes bonuses to ensure all players are entertained. The highest payout of 500 coins might not seem like much, but actually the benefit comes in with how often these winning combinations present themselves.

Novomatic is one of the most recognised developers online as they offer a wide range of video slots that are easy to play and provide various advantages in each of their creations. With this video slot, they have created an amazing range of animations that take place in a classic cartoon manner.

These animations are presented when at least 3 of the same symbols appear in a combination from left to right over any one of the paylines. The feature also takes place when a bonus has been triggered, allowing players to enjoy a short film of the storyline. The symbols include pirate ships, treasure chests, swords, the island where the treasure is hidden, and the shark that might just attack the pirate before he finds his treasure.

Sharky only has 9 paylines and 5 reels, which is a benefit for those of you who seek video slots with a lower bet total. Players will find all the betting options are shown below the reels where you can change the bet value and the number of lines used per spin. The game also includes free spins, scatters and wilds, but keep in mind that free spins are played with the same bet value as used when it was triggered, meaning a higher bet value with all lines is sure to provide a better reward amount for the feature.

The pirate is the wild symbol, which also comes animated once it’s featured in a combination. The biggest benefit with this symbol is that it has the ability to act as other symbols to offer more winnings. This wild can copy all symbols other than those that activate additional winnings such as the scatter.

To activate the free spin bonus feature, the game will require the pirate ship on the first reel along with the island symbol on the 5th reel. This will take you to a different reel set, which presents the same symbols and includes 10 free spins.

The game can also include shifting wilds when the ship appears on the reels. This will present the pirate that will shift to the right one reel per spin and act as a wild in the position it stops in. Should the treasure chest appear alongside the pirate, players are in for an instant reward as the pirate swims to collect the prize it holds. The feature can be reactivated, but once again the ship and island will need to appear on the first and last reel. This will include another 10 free spins with the features mentioned above.

What we Like/Dislike About Sharky Video Slot

Sharky seemed to be the same as every other video slot out there with standard features and rewards. However, we were highly impressed with the winning combinations once the free spin feature was activated and the additional winning opportunities presented themselves. This is a video slot everyone will enjoy as it includes all the most important aspects that make for a great slot, while also offering unique bonuses at the same time.