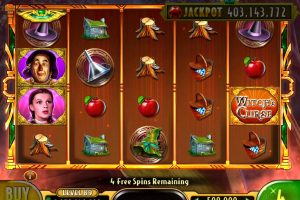 WMS Gaming could simply not resist recreating the 1939 hit film to bring players endless fun, fabulous winning opportunities and a chance to sing along to “Over the Rainbow”, while aiming to win big, surrounded by the crowd from The Wizard of Oz.

Even today with all the modern technology used in films, The Wizard of Oz is still mentioned on the best-film lists, in the reel world, the game equally impresses with exciting bonus features such as scatters, wilds, free spins, a bonus round and a jackpot offering a staggering maximum payout of 50,000.

Based on the novel as well as the hit film, the game lives up to the fantasy, musical, comedy-drama called The Wonderful Wizard of Oz by Baum in the 1900s, all because of WMS using the same Technicolor that was notable at the time.

The Glinda good witch feature triggers when Glinda appears randomly during the base game to transform one up to five symbols into expanding wilds, the wild stands in for all others apart from bonus featured symbols and the jackpot.

The Oz pick feature triggers when three feature symbols appear on the first, third and fifth reels, players then get to select one of the feature symbols to discover a monetary cash win or activation of the winged monkey feature or the road to Emerald city feature. A monetary cash amount or the winged monkey feature will be awarded when less than the maximum paylines have been selected.

The road to Emerald City feature prompts players to choose one of the emeralds displayed, which could reward a character land, emerald city or a monetary amount. Revealing a character land gets you sent off to tin man apple orchard, scarecrow corn field, wicked witch castle or the cowardly lion dark forest.

At the scarecrow cornfield, you are required to choose one gold charm to return to the yellow brick road or reveal a scarecrow. Ending up at tin man apple orchard could reveal a tin man or sent back to yellow brick road, as would cowardly lion dark forest or wicked witch castle.

What we Like/Dislike About Kronos Video Slot

Wizard of Oz video slot is also available on all mobile devices allowing players to either head over to the emerald city or linger longer, which is definitely a very nice option. The Glinda good witch surprises with an astonishing win when she occasionally appears, although the feature does not trigger regularly, the variety of other features more than stands in for Glinda’s absence.